As part of this residency at Dance Limerick I gave a series of workshops to mothers in the studio exploring the skills and abilities which we have acquired through our continuing development into mothers and how we may frame these skills in a positive and valuable way.

My artistic interest lies in an embodied practice which draws together voice and movement, society, stories and health. Since I got pregnant and became a mother I have been intrigued by the ongoing changes which occur in my body; Neural re-modelling and how our ceaseless movement can be perceived as a continuum from the cellular to the social and from the individual to the cosmic. Is what happens inside my body mirrored in society? Should it be?

I’m trying to find ways through my practice to explore Bracha Ettingers Matrixial theory which aims to rethink the masculine-feminine opposition, the matrixial gaze which is like a moment we share before meaning forms “a dimension of emergence, where objects, images, and meanings are glimpsed in their incipiency, before they are differentiated’.

I have been investigating male microchimerism in the female brain: the migration of fetal cells through the placenta during pregnancy. These cells engraft maternal tissues and, eventually, become her. Once they infiltrate the host they differentiate, replicate and proliferate. How could this affect the mothers health, decision making and powers? Nature at work.

Identity then becomes a new question for me. What is m/other? An infinity of engaged systems. Mutation. Alien cells colonizing my body to what effect? Ebbing and flowing. Forming and unforming and reforming. You suck me in, I pushed you out.

Interdimensional travel; Another other sense, extra feminine difference, the waves of breath, the vast and inter-dependent multiplicity of the sea. The matrix is the place from where things grow. Ideas, concepts, humans. Buoyancy, support and connectedness.

I left my centre behind, it had been so full and so rooted. After giving birth to the I-that-is-not-I, I forgot about my belly. No, I loathed it. It felt less than, watery, scarred, abandoned, an empty warehouse…. Some dysfunctional appearance of the belly breeding an exhausted, negligence of myself. So I aim to reconnect with my centre by dismantling the perceptions which have been allowed to infiltrate my sense of “I”. Revaluing my skills even against a consumerist background, in parallel, working with and allowing new connections to grow. I seek support from appropriate places and I nurture a support-seeking society. I meet the mothers and we focus our powers.

I am placing the maternal as-a-state-of-being in the world at the centre of my quest. There are cells from my daughters fathers family living in my body, becoming me, nature is always at work. What kind of world could evolve if we prioritise the powers of the origin?

Umbilical Breath.
To me it feels like organs moving over each
and for each other.
A liquid breath which has an oozing quality, spreading through the layers of the body.
Gravity assists.
Eventually you gasp for breath.
How lovely.

With special thanks to Jenny, Emer and Gearoid at Dance Limerick. Stephanie Felber, Ailbhe Keoghan, Robin Palmer, Alexis Clancy and all the mothers who gave their time and their stories to this work. 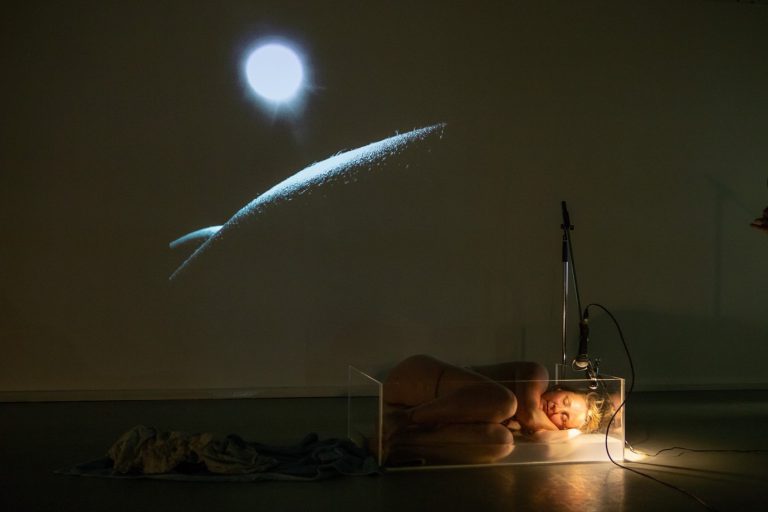 The WHAT NEXT dance festival returns in-person to its home at Dance Limerick, …